I love chocolate buttons, late night movie re-runs and a morning cuddle with my pups (yes, I’m a dog trainer and my dogs are welcome to sleep on my bed!).

I’m also the founder of Paws Up Dogs, which was inspired and created through my experience living with and loving my own rehomed dog, Riggs (more about that little gem below).

I’m a Certified Dog Behaviourist and also a Clinical Psychologist so I like to take what I know about dogs, what I know about people and put it together to help you to build an incredible bond with your dog and find solutions to your training challenges. 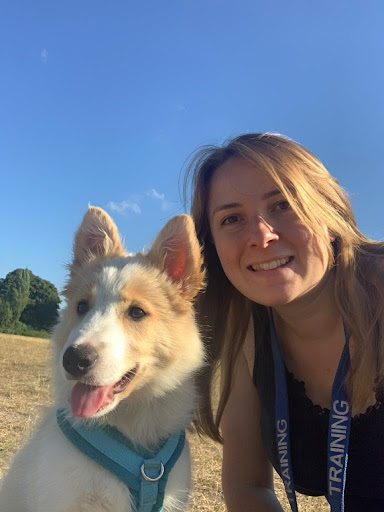 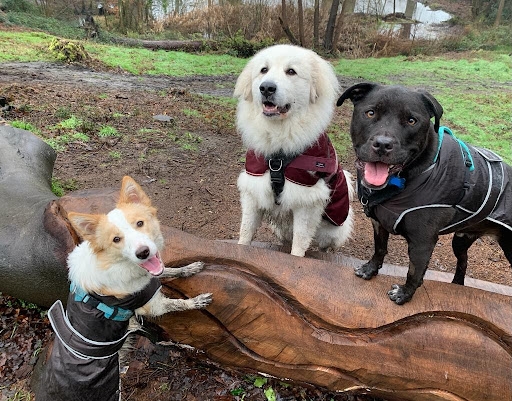 Left to right we have Squid, a border collie, a working breed. Many assume she is “clever” and “easy to train”. Yes, she is both of those things and yet she is also 0-100 in 2 seconds and has a HIGH chase instinct.

Aya is up next, a Pyrenean Mountain Dog, a livestock guardian breed. Many assume very different things based on her breed – that she is independent, “stubborn”, even “untrainable” according to some!

Riggs is last but not least, a Labrador/Staffie Cross. Half gun-dog, half terrier – a hunter! Head in the bush, sniffing!

They are all VERY different, they all have genetic traits specific to their heritage. One thing in common…their connection with me…their human and guardian.

It’s that joyful bond between a dog and their human..and THAT is what gets the kind of focus and desire to work with you that we all long for…and that is what our work is all about.

I am a licensed clinical psychologist and fully accredited dog trainer (Association of Pet Dog Trainers No: 01432). I am also Canine First Aid trained. 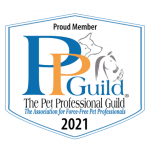 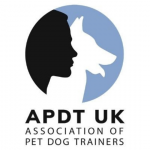 It wasn’t always easy…
This Is Riggs’ Story

MR. RIGGS IS ONE OF THE BEST DOGS IN THE WORLD.

Riggs came to live with us at six months old and hadn’t had brilliant beginnings. He’d learnt a few tricky behaviours including learning how to BARK (loudly) and was terrified to be left alone, even in another room. He was frightened in new places and suspicious of loud noises, new people and dogs. This translated to lunging and barking at other dogs and people, not just in public but at home when guests visited too. We understood he was feeling anxious but to others it just looked like we had an “out of control”, large, aggressive dog.

I felt a combination of worry for him, embarrassment and frustration for me and then subsequent guilt for feeling frustrated with him. It felt like an endless cycle and whatever we tried we remained stuck.

We tried training classes, an at home behaviourist, online courses and midnight googling but still nothing seemed to help him.

That was until…we stripped everything back and focused on his very fundamental needs. No more asking him to sit when he saw another dog (because we thought that would get him “under control”, no more “uh-uh” or “no” or “leave it” (all of which just mask the problem instead of addressing the emotions the dog is feeling).

Instead we focused on helping him to feel safe, supported and confident in all areas of life. We organised his week into activities that harnessed his natural abilities and we made every, single interaction with us about strengthening our connection together.

It’s now been many years since Riggs has shown any of the fear-based and aggressive behaviours he once did. He has zero separation anxiety and is confident enough to my demo dog in classes and workshops and a bomb-proof companion in any situaion. He’s also a massive cuddle monster, super eager to please and my very best friend.

This is possible for you and your dog too, whether you are rehabilitating your current dog, rehoming an adult dog, or bringing up a new little puppy. 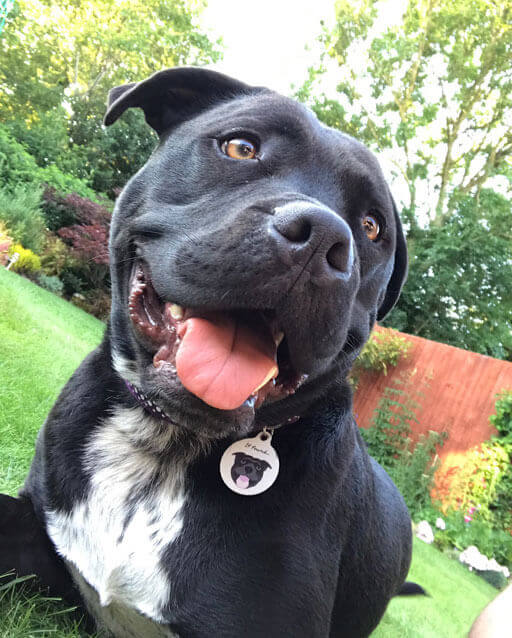 This course is the one for you! Learn how to teach calm behaviour for a dog that defaults to chilling out, rather than excitement. Fab!

Puppy Parenting is wonderful but it can also be tricky.

Puppy Parenting 101 is your complete puppy training blueprint. This course takes you through the exact steps to raise a happy, healthy and well behaved pup and to develop a bond that will last a lifetime!

We focus on 4 key training areas to get your pup off to a fabulous start, offer a private facebook group for support and live coaching calls with Holly

Do you have a dog that pulls? Sniffs at everything in sight? Zigzags in front of your? Sits down and refuses to move? Or maybe you just don't exist outside...they can't focus on you at all?

Don't worry, I've got you covered! As a trainer, Loose Lead Walking is one of my most asked about topics. So I've put together a fun and easy to implement course to teach beautiful loose lead walking that will work whether you're working with a tiny puppy or a dog that has pulled for years!

Now the course isn't open right now but if you'd like to be the first to know when it does open just add your self to the waiting list below:

Now the course isn't open right now but if you'd like to be the first to know when it does open just add your self to the waiting list below:

Ready to build a great relationship with your dog?

Ready to build a great relationship with your dog?

This free e-book invites you to take the 7 day bond-building challenge with a load of fun games to kickstart an even better bond with your dog!

I love sharing new and exciting dog training games with you and your dogs!

Yes! Please keep me posted on new trainings, demo videos, and future courses!
OR
Nope. Just send me the e-book

Congratulations on your new bundle of floof!

Having a new puppy in your life is amazing but the constant nipping and biting can get old…quickly.

Check out the Calm TheCroco-Pup Code for quick & easy tips to reduce puppy biting with kindness!

Yes! Please keep me posted on new trainings, demo videos, and future courses!
OR
Nope. Just send me the e-book

Get in contact to arrange digital 1:1 coaching via phone, zoom or facetime.